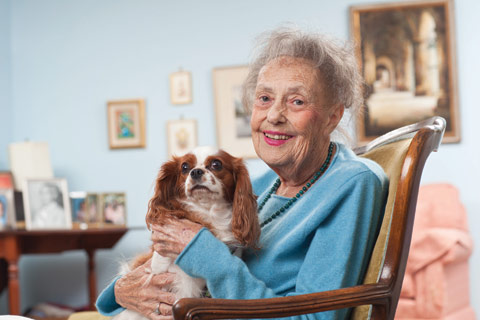 Throughout the home of Mary Lou A., 81, are reminders of her husband Bob and their life together, which is captured in family portraits of weddings, graduations, and holidays. A collage shows Bob as a child in his native Yugoslavia, and as a teen in Italy where he and his family escaped the Holocaust.

Mary Lou, a social worker, met Bob after he settled in the United States and became a psychiatrist. The couple raised three children, enjoyed the love of nine grandchildren, and treasured a marriage that lasted decades.

It was Bob who first needed additional support at home. Macular degeneration had caused significant vision loss, which left him unable to perform routine tasks.

At first Peggy spent a few hours a week with the couple, focusing most of her energies on Bob. As his health declined, Peggy became more of a familiar presence in the home. Sadly, after two years of providing care, Bob passed away, leaving Mary Lou alone in a very large house.

“Although Mary Lou was relatively healthy, because of her age, it had become harder for her to do things on her own.” shares Peggy, who now provides care and companionship for Mary Lou five days a week.

An avid animal lover, Mary Lou can often be found sitting on the sofa in her spacious living room, with her precious dog Amber snuggled comfortably on her lap. She is one of two Cavalier King Charles Spaniels who are constantly showered with love by Mary Lou, as well as a cat, and a beautiful Arabian horse who is stabled at a local farm. 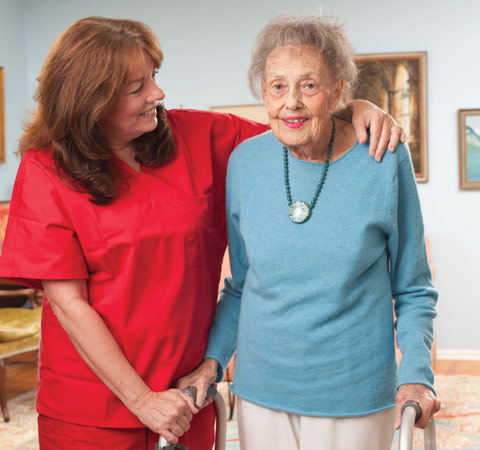 “When we needed extra help at home, I knew that it had to be someone who loved animals,” says Mary Lou. Fortunately, Peggy was the perfect match.

“I take Mary Lou to the stables where she feeds and brushes her horse.” says Peggy, who enjoys helping care for her pets. “I also take her to doctor appointments and errands, help her pay bills, assist her with grooming and self care, and basically just do whatever needs to be done.”

Peggy is particularly focused on ensuring Mary Lou gets proper nutrition. “She survived a bout with lung cancer 12 years ago, but the chemotherapy robbed her of her sense of smell, which makes it really difficult for her to enjoy her food,” explains Peggy. “It’s a real struggle to get her to eat, so I’ll make an extra effort to cook her foods she enjoys, like salmon, shrimp, and steak.”

For Mary Lou, gestures like this are why Peggy has become much more than a home health aide and companion to her. She has become a trusted confidante and friend. In fact, she turned to Peggy to help her make the very difficult decision to give up her driver’s license.

“Mary Lou knew her health limitations and that she probably should no longer drive,” says Peggy. “But giving up her license meant giving up part of her independence. We talked about it for a long time, but I knew that it had to be her decision, not mine. She had tears in her eyes when she told me, but I was so proud of her for making the right decision.”

Peggy, who learned about BAYADA four years ago, loves her new profession. Before training to become a home health aide with BAYADA, Peggy had worked as a dental assistant, and dedicated her time to being a wife and mother.

When my daughter went off to college, I decided I wanted to go back to work,” she says. “I heard that BAYADA offered a home health aide course, and I thought it would be the perfect career choice for me.”

As soon as she completed her training, BAYADA assigned Peggy to her first clients, Mary Lou and Bob, and she has been there ever since.

For Mary Lou, life without Bob has been difficult, and she misses him every day. However, even though she is alone is a large house, she does not feel lonely, thanks to Peggy’s companionship, support, and love.