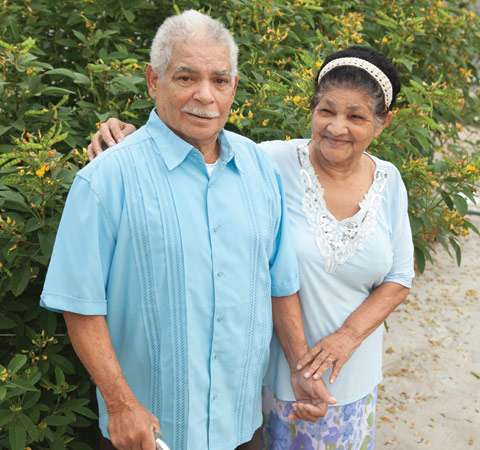 Rice and pigeon pea beans, a dish native to Puerto Rico, is a staple in the home of José and Isabel.

Each spring, José, 73, plants the pigeon pea seeds in the garden that graces his front entrance. Several months later, as the summer humidity gradually gives way to crisp autumn mornings, the pigeon pea plants have grown several feet, each branch bearing the fruit of his labor.

After he and his wife painstakingly pluck all of the pigeon peas off their branches, they are frozen in preparation for a fabulous dish they will share with the couple’s 12 children, 25 grandchildren, and 20 great-grandchildren!

José, a former cook, has been making pigeon peas for his family for decades.

However, this year, he will have to watch from the sidelines. A devastating stroke left him with paralysis on his left side, unable to use the hands that have so skillfully crafted his family’s favorite meal.

After returning from his stay in the hospital and a rehabilitation facility, BAYADA Home Health Care entered his life.

The stroke prevented José from using his facial muscles, arms, and legs on his left side. Now, after intensive nursing and physical therapy in his home, José is determined to get back into the kitchen and start cooking again.

“It was really hard at first, my father cried a lot. He was very independent and not used to getting help,” shares his daughter Betty.

BAYADA Nurse Kika Garcia-Awan, RN, communicated with José in his native Spanish, a gesture that put him immediately at ease. “During my visits with José, I checked his vital signs, made sure that he and his wife understood how and when he should take his medication, and educated them about stroke and the disease process. His blood pressure is under control, and he’s doing much better now,” says Kika. 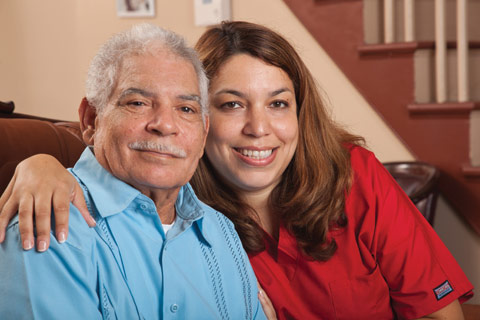 A hospital nurse for many years, Kika now enjoys the flexibility and autonomy of home care, as well as the opportunity to really get to know her patients. Rehabilitation sessions with physical therapist Yomi Ramos, PT, were another vital part of his recovery.

“Because the stroke left his left side very weak, José compensated by leaning to the right which created problems with his balance and put him at high risk for falling. He also walked with his head down, knees bent, and was not able to go up and down the stairs,” explains Yomi. “He also lost fine movement ability in his left hand. We worked on range of motion exercises of the shoulder, elbow, wrist, and fingers to re-educate his muscles. When he first came home from the hospital, his left hand was permanently curled in a fist. Now, he opens his hand and has movement.” 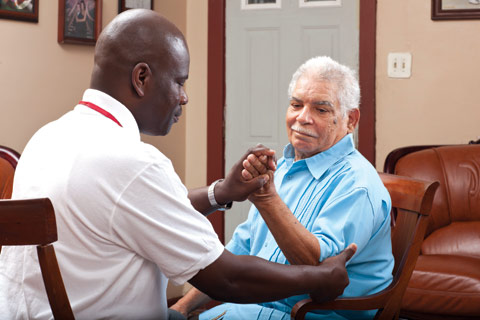 Yomi, who is working towards a doctorate in physical therapy, was drawn to the flexibility of home care and the ability to create his own schedule.

The inspiration for his career choice came from his nephew, who was born with cerebral palsy. “My nephew grew up to become a carpenter because his physical therapist helped him overcome many of his disabilities,” he shares. “That showed me firsthand how physical therapy can make such a positive difference in a person’s life.”

Sitting in the comfortable family room of his home, next to his wife, and surrounded by photos of his children, grandchildren, and great-grandchildren, José feels reflective about his life since the devastating stroke.

He is grateful to Yomi and Kika for helping him regain the ability to walk and the use of his hand. He dreams of getting back into the kitchen so that he can, in the not so distant future, cook Pigeon Peas once again.