Teen with Quadriplegia is Just One of the Guys 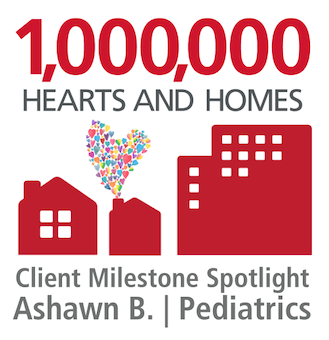 Eighteen-year-old Ashawn B. will never dance, yet he went to his Sophomore Cotillion and to both Junior and Senior Proms at Eastern High School in Voorhees, New Jersey. He is an ardent sports fan who will never play basketball or baseball, yet he was a team student manager in both sports. Ashawn has accomplished this and more despite having quadriplegia and needing a tracheostomy to help him breathe.

To us at BAYADA, Ashawn is a daily inspiration. In the face of severe challenges, he is someone living life to the fullest, setting milestones for himself and meeting them. BAYADA Nurse Mary Martin has witnessed this grit up close since she started working with Ashawn when he was nine years old. She began in September, 2010 and became his primary nurse at school that November. When Ashawn started with Mary, his major goal was to attend school with children his own age outside of the Voorhees Pediatric Center where he lives. He’s done that. 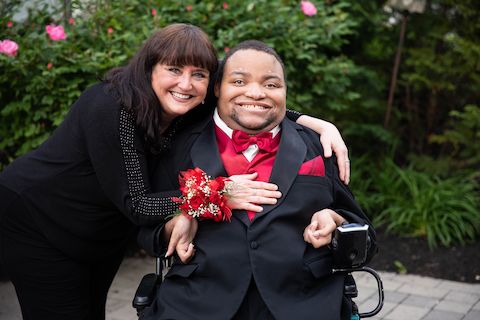 With Mary by his side, Ashawn has been able to be part of many school events in addition to the dances and student managing. He has gone on field trips with his class, attended movies, and been able to eat lunch with the other students. He and Mary also went to his middle school graduation, as well as the class party afterward at a swim club. Like all of us at BAYADA, Mary loves what she does. That is why she went above and beyond and threw Ashawn a surprise party for his 15th birthday. All but one of his classmates attended, and they made Ashawn feel the one thing he wanted to feel most — like one of the guys.

As you might expect, Ashawn and Mary have grown extremely close. So much so that he sometimes calls her, “Mom.” Mary says, “You can’t help but love him! He is a sweet and funny young man.” One example of his sense of humor is when he teased Mary that he was wearing a red tuxedo to the Senior Prom in honor of her BAYADA scrubs. His tuxedo ended up being black, but it was accented with a bright red vest and bow tie. That’s grit … with a smile on it.