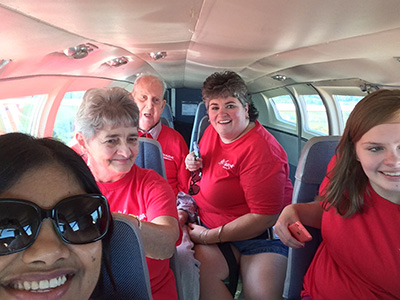 John has always been obsessed with flying. Just two weeks earlier, when speaking to his hospice team members during a “life review” about experiences that would be important to him as he prepared for the end of his life, John mentioned his desire to experience flight and go up in a plane one last time – but he didn’t think it would be possible. Wanting to make one of his last wishes a reality, BAYADA Hospice Volunteer Coordinator Christiane Dionne jumped into action.

Christiane contacted Lebanon Municipal Airport, which had already scheduled a community event on Saturday, September 27 to provide plane rides to local residents, to arrange a flight for John. Although all of the flights had already been filled, airport manager Rick Dyment offered to arrange for John and his BAYADA Nurse Jeanette Leavitt to take a flight free of charge.

A nurse from John’s BAYADA team – which includes a nurse, social worker, spiritual support counselor, home health aide, volunteers, and a physician – thoroughly evaluated his condition and medically cleared him to fly. Many BAYADA employees and volunteers from the Norwich, VT office attended, including Medical Director John Saroyan, MD, to cheer on the US Navy veteran as he soared through the sky one last time and checked a very important item off his bucket list. “It was an amazing day,” said Dr. Saroyan. “When he arrived, we were all grinning from ear to ear. I was really moved.”

Although coping with dementia and forgetting many details of his past, John clearly remembers the feel and thrill of flying. After landing, John told a reporter from the Valley News how he wished he could have been the one at the controls. “I’d give them a show,” he joked.