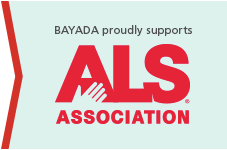 When Jodi O. thinks about her husband, Kevin, warm memories of a funny, loving, and brave husband and father fill her mind. She remembers how his bright personality and wonderful wit continued to shine through, even after he lost his ability to speak and move. Kevin’s six-year battle with the rapidly advancing disease never prevented him from having hope and living his life to the fullest, spending precious time with Jodi and their daughter. He also made time to be an advocate for advancements in treatments for ALS, traveling to Washington, D.C. to lobby for FDA approval of a new ALS drug.

During those six years, Kevin was able to remain living safely at home with the help of his BAYADA Nurses and his loving, dedicated wife. Jodi says that having BAYADA in her home gave her peace of mind, allowing her to sleep through the night. She shares, “When they were there, I knew it was okay to fall asleep and get the rest I needed for the next day. When they weren’t there, I was on high alert all night, listening for the slightest changes.” Jodi keeps a memory book commemorating their battle with ALS and reflects fondly on the BAYADA Nurses who were part of their journey. Jodi formed a special bond with Kevin’s nurse, Lynne, with whom she remains close today.

After Kevin’s passing, Jodi funneled her grief into helping people with ALS and their loved ones, as well as spending time with her daughter. She worked with The ALS Hope Foundation in Philadelphia and planned events for families of people with ALS. It was through one of these events that Jodi met Benton and his two children, Nora and Adam, who lost their mother to ALS. Their families bonded through their shared loss and, eventually, Benton and Jodi married.

As the mother of this new blended family, Jodi saw firsthand how difficult it was for her three children to cope with the loss of their mother and father because of ALS. She knew that there were other children out there in the same situation, and wanted to find a way for those children to connect with each other for support and companionship.

It was for these reasons that Jodi formed Hope Loves Company (HLC), which honored the memory of Kevin, and Benton’s late wife, Tina. HLC, a non-profit organization, provides fun opportunities for children who have or have lost loved ones with ALS to meet each other for education and emotional support. Jodi loves being able to connect with children and families whose lives have been affected by ALS and finds tremendous satisfaction in helping them. HLC has the support of many members in her community who sit on the board, including Kevin’s BAYADA Nurse, Lynne!