Vincent G. had been receiving palliative care from the BAYADA Hospice office in Boyertown, PA since January of 2014. After receiving a diagnosis of melanoma at 58 years old, he decided to spend the last months of his life living with peace and comfort, surrounded by the people he loved. 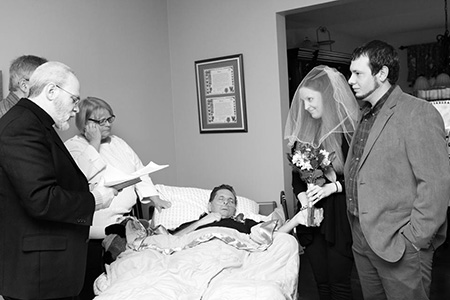 His family wanted to do all that they could to make sure his last days were memorable. That’s why his 21-year-old daughter, Melissa, took a leave from college to help with her father’s care. After interacting with Melissa, BAYADA Nurses found out that she was engaged to her longtime boyfriend. The nurses asked her if she wanted BAYADA to help arrange a ceremony at home so her father could see her wed.

Melissa said yes and the thought went from an idea to a reality within 24 hours. During Valentine’s Day week, BAYADA staff scheduled an officiant and had local companies donate flowers, a wedding cake, and other accompaniments to make the day special.

Though Vincent was bedbound and spoke minimally at the end, he was still coherent. After witnessing his daughter’s wedding vow exchange, he gave a “thumbs up” to the couple. Vincent and his wife also renewed their own wedding vows during the ceremony.

Vincent passed only 24 hours after the service in February. His family was appreciative that those few final days—usually the most difficult for families—became days that they will always remember fondly.