One of Nancy Dumont’s fondest memories of her husband Terry came in the final weeks of his four-year battle with colon cancer. “He was watching a concert on TV,” remembers Nancy. “He got a very stubborn look on his face and asked me to bring him one of his guitars. So I brought him the first guitar he ever owned, put it in his hands and he played for a few minutes. He sure was happy at that moment, and so was I.” 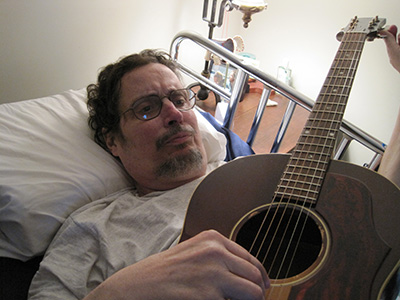 Not long after that impromptu performance, Terry passed away at the age of 57. Nancy credits BAYADA Hospice for allowing Terry to live his final days in the comfort of home, where he could enjoy his music and treasure every moment with the woman he had loved for 25 years.

While receiving radiation and chemotherapy to try to treat his cancer, the couple remained positive without being delusional. “We became better people during those four years,” says Nancy, who, along with Terry, knew when the time had come to consider hospice. “When I told our palliative care team at the hospital that I wanted to explore BAYADA, they strongly encouraged me to do so. I knew BAYADA was right when I met the staff. They delivered on every promise.”

BAYADA Hospice believes people with advanced illness and their families deserve end-of-life care delivered with compassion, excellence, and reliability, the core values of the company.

“The nurses from BAYADA were unflappable, genuine caring individuals,” says Nancy. “There were moments when I would think, ‘I can’t do this.’ Then the nurses would say ‘Yes you can,’ and they would give me the support I needed. You can’t put a value on that.”

During Terry’s two months of hospice care, the nurses made sure the medications worked properly, and taught Nancy how to administer the drugs. A social worker visited several times, and following his passing, BAYADA offered bereavement support.

Nancy admits she took a leap of faith when she welcomed BAYADA Hospice into her home. “We were overwhelmed and didn’t understand everything in the beginning,” she says. “We just knew that BAYADA could help keep Terry home, which is all he wanted in the end.”