Andy and Kathy Leclaire knew exactly what they wanted to do for their 39th–and final–wedding anniversary in October. They hoped to visit Yankee Candle Village. Located in Deerfield, Massachusetts, about 30 miles south of their home in Brattleboro, Vermont, the trip may have been simple a few years ago, but would now require a team effort. 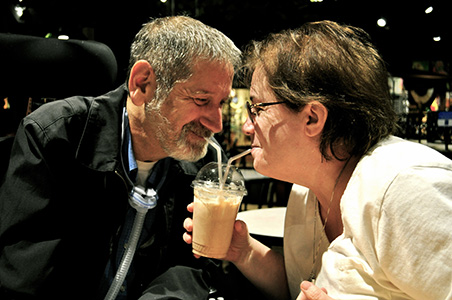 In February of 2014, Andy received a diagnosis of amyotrophic lateral sclerosis (otherwise known as ALS or Lou Gehrig’s disease). Since then, he and his wife Kathy have focused on enjoying the time they have left together, and making new memories. In March of 2015, as his ALS progressed, the family called BAYADA Hospice to address his quality of life and help ease his pain and symptoms.

When the Leclaires decided to venture out to Yankee Candle Village, Andy’s sister-in-law Pam offered to drive her vehicle with a trailer to transport the couple and Andy’s electric wheelchair. Pam’s son Greg and his friend John followed in a car behind the trailer for reassurance. Andy knew that due to increased choking episodes from his ALS, he would only consider traveling if his BAYADA Hospice Nurse Kathy Krasnow would go along for the ride. Kathy immediately agreed.

Yankee Candle Village, a flagship store of Yankee Candle, celebrates Christmas throughout the year with a multitude of experiences. Once there, Andy and Kathy enjoyed a room where it snows every four minutes and then visited a shop where Andy chose a special ornament for Kathy so she could ”always remember“ him. The couple enjoyed a meaningful lunch where they split a milkshake and then visited Santa where Andy asked for ”peace and love.“

When Andy started to become fatigued, the group headed back home. As his BAYADA Nurse Kathy looked in the back seat observing the two of them one final time, Andy had tears in his eyes and he mouthed the words, ”Thank you.“

With the help of some caring individuals, Andy and his wife Kathy experienced a magical, wish-fulfilling day that they will always cherish.