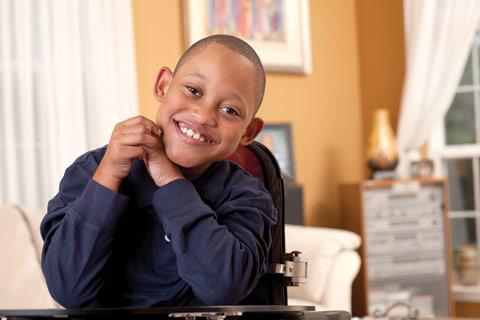 Gabe D., 10, is happily watching one of his favorite movies, Diary of a Wimpy Kid. For good measure, he also holds the book of the same name on his lap.

“He doesn’t just watch movies, he wants to learn everything about them,” says Gabe’s mom, Savine, describing her good-natured son who loves baseball, horseback riding, trips to the library, and cheering on his father Tony, who coaches a high school basketball team.

“The best thing of all,” adds Savine, “is that his nurses understand his likes and dislikes, and go the extra mile to make him happy.”

Indeed, Savine considers Gabe’s home health care nurses, Marianne Patterson, LPN, John Bowen, RN, and Stephanie Schwenk, LPN, like members of the family. However, she was not always keen on the idea of welcoming strangers into her home.

Born at 27 weeks gestation, Gabe spent 5 months in the hospital battling a serious infection, and struggling to survive. “He took one step forward, and two steps back,” explains Savine. “At 4 months, his airway collapsed, and doctors needed to create a hole in his trachea so he could breathe. By the time he reached his first birthday, he barely weighed 11 pounds. He had severe reflux and wasn’t getting enough nutrition, so we decided on a feeding tube to give him the calories he needed.”

Gabe was diagnosed with cerebral palsy, which causes a lack of muscle control in the arms and legs. At first, Savine and Tony tried to care for their child’s complex medical needs on their own.

They soon realized they needed help, and found out that BAYADA Pediatrics had the expertise to support Gabe.

“At first I was scared, I didn’t think anyone could care for my child better than I could,” shares Savine. “But I soon realized that the nurses had the special training required to deal with all sorts of situations, especially when Gabe stopped breathing. They knew exactly what to do.”

Once the nurses were there, Savine’s fears melted into relief. Knowing her son was in excellent hands, she was able to return to work. Today, Gabe’s nurses provide care three hours a day after school and for eight hours at night, seven days a week.

Although unable to speak, Gabe has no difficulty letting people know what he needs. “Gabe communicates with body language,” says Savine. “He can speak, he just speaks differently.”

Gabe also uses a communications device which Savine describes as a bit larger than an iPad. When he touches one of the many pictures on the screen, a computerized voice talks for him, telling his parents, nurses, and teachers what he wants.

While Gabe had the tracheotomy removed at the age of five, he still relies on a feeding tube for nutrition. What’s more, his fragile respiratory system puts him at high risk for pneumonia. “The nurses understand his medical needs so well, and they immediately recognize the earliest signs of pneumonia. They get him the medical attention he needs so that he doesn’t have to go into the hospital. Without BAYADA, it could have been so much worse,” says Savine.

Although Gabe has use of his arms and legs, the spasticity causes lack of coordination, making movement difficult. His nurses perform range of motion and strengthening exercises, and help him get around using a specialized walker. 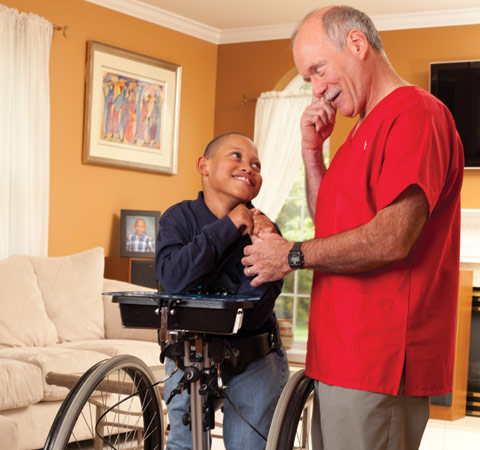 They also keep him clean, give him medication, feed him through the feeding tube, check his vital signs, and of course—watch his favorite movies with him.

“Over the years, the nurses have taught our family so much,” says Savine. “They helped us understand cerebral palsy, and get the support we needed. They have become an active partner in Gabe’s care.”